When I first met Sasha, she was definitely not a beginner sewing student. Sasha came to her sewing lessons with a bunch of sewing experience already behind her.

Sasha wanted to push her expertise to the next level and she certainly did that! She spent her time in the sewing studio trying out advanced techniques.  Some of the challenges she took on included sewing a piped collar and making vertical pleats in a pink corduroy dress for her adorable little daughter.

Sasha also wanted to learn how to “extricate” a single pattern from a multi-pattern/multi-size insert in a pattern magazine. She mastered that and her project came out great!

Sasha’s most ambitious project was an “heirloom” pattern she chose to make another dress for her daughter. Not only was it an advanced level pattern with multiple horizontal pleats, hand-made ribbon embroidery, puffed set in sleeves, buttons and buttonholes, but she chose silk taffeta as her fabric. Definitely not the easiest fabric to work with! During the early days of the garment’s construction she carried it back and forth from lessons rolled on a tube to keep the fabric from creasing and she discovered early on that needle holes made in the wrong place meant a re-do! 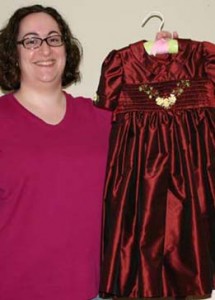